UI ALUMNI SHOULD BE ENCOURAGED TO DO MORE - PROF OGUNLESI 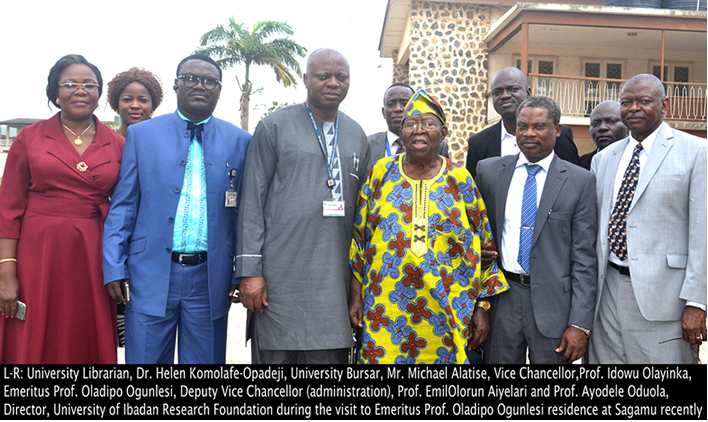 The first African Professor of Medicine and founding father of the UI Medical School Emeritus Professor Theophilus Ogunlesi has charged the management of the University of Ibadan to encourage its alumni to do more in support of the country’s premier University.

Emeritus Professor Ogunlesi gave the charge when the University of Ibadan management paid him a visit in his country home in Sagamu, Ogun State.

The visit was to identify with and congratulate Emeritus Prof Ogunlesi whose son, Adebayo Ogunlesi was appointed as a member of the Advisory Committee of President Donald Trump of the USA.

The Vice Chancellor, Prof. A.I. Olayinka, in his remark said that he considered it a great honour to be able to visit one of the greatest Icons who contributed immensely to the development of the prestigious University and especially, the College of Medicine.

Emeritus Prof. Ogunlesi in his response, recalled with nostalgia, the days that he and his colleagues served the University and how much support and respect the University community enjoyed back then.

Emeritus Prof. Ogunlesi, who retired from the University 34 years ago, bemoaned the current state of Nigerian Universities, a problem which he attributed to poor funding among other things.

He encouraged the University management to challenge its alumni and icons, of which he is one, to contribute towards ensuring that the University sustains its pride of place by supporting management’s effort.

At 94, the Nonagenarian expressed his willingness to support the cause of the University of Ibadan while challenging others to follow suit. This, he demonstrated by declaring his intention to endow a professorial chair at the University.