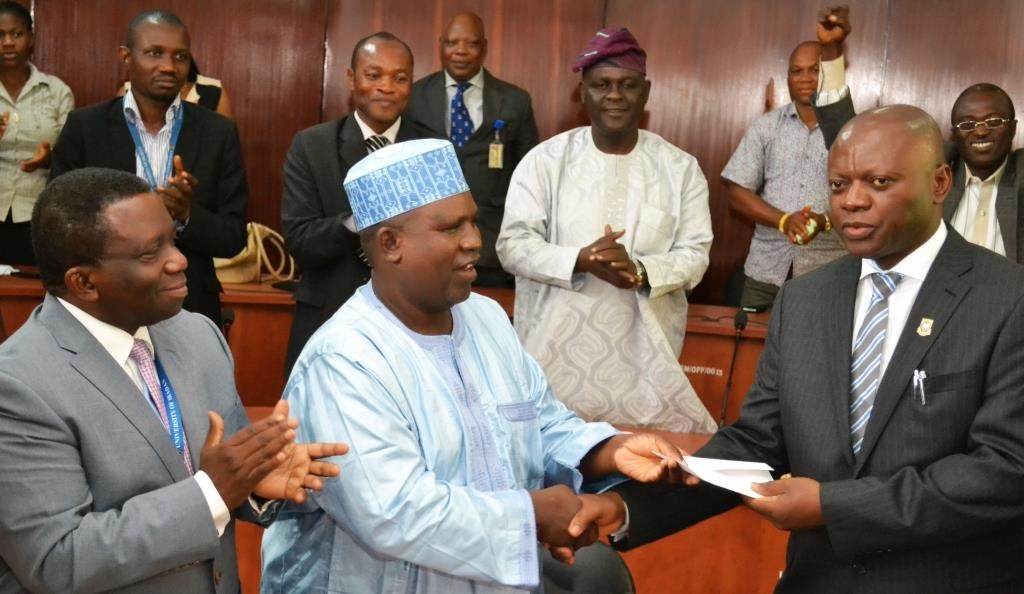 The Governing Council of the University of Ibadan has appointed Professor Abel Idowu Olayinka as the 12th Vice Chancellor with effect from 01 December, 2015. He succeeds Professor Isaac Folorunso Adewole whose tenure as VC ends as of that date.

Announcing the appointment at a well attended and historical press conference in the Senate Chamber of the institution on Wednesday, 9 September, the pro chancellor and chairman of council, Dr. Umar Musa Mustapha said the new VC, a world-class geologist, is the first person from the Faculty of Science and the Department of Geology to be appointed as VC since the University was established in 1948.

In line with the University's tradition, a new Vice Chancellor usually emerges three months to the end of the incumbent's tenure. According to the pro chancellor,"this is to ensure a seamless transition, allowing the successor to understudy the incumbent. The advantage here is to enable the new VC to hit the ground running."

Dr. Mustapha noted that Prof. Olayinka was selected among thirteen candidates through a credible and open process.

Recalling the process that led to the emergence of the new VC, the chairman said the journey began about six months ago when the council in exercising its statutory responsibility approved the placement of advertisements announcing the vacancy for the position of VC on Thursday, 26 March, 2015.

He stated that twelve applications were received in response to the advertisement while one other candidate was added through the search team process. In all, thirteen candidates applied for the position.

The pro-chancellor explained that these applicants were screened and a short list of six candidates emerged. "The choice of Prof. Olayinka was unanimous after three candidates were recommended by the selection committee out of the six candidates that were shortlisted for the position."

The chairman said, "in the process, UI's interest was put first. Nobody was under any pressure that was not controllable. I hope other Universities will learn from the University."

Prof. Olayinka would resume on December 01, 2015. Before then, he will understudy the current VC. I thank the outgoing VC for the wonderful job he did for the University. He took the institution to greater height. Today, UI is ranked as the best University in Nigeria and one of the best in Africa. We have the best distance learning centre in Africa", the chairman said.

The pro chancellor advised the new VC to uphold the values of the University and contribute to its progress.

"Born 57 years ago, Prof. Abel Idowu Olayinka joined the services of the University of Ibadan in 1988. He rose through the ranks and was elevated to the grade of Professor on 01 October, 1999. He has served the University in various capacities, including Head, Department of Geology, Dean of the Postgraduate School and Deputy Vice Chancellor (Academic).

Thereafter, the pro chancellor formally issued a letter of appointment to the new VC.

Dr. Mustapha advised the new VC to carry everybody along, be creative and innovative.

He further said "as a University, we appreciate President Buhari's administration in its fight against corruption.

In his remarks the outgoing vice chancellor, Prof. Isaac Folorunso Adewole described the appointment of Prof. Olayinka who served under him as the deputy vice chancellor (academic), as historic in the life of the University.

He thanked the University community for allowing him to serve them and for the unprecedented support he enjoyed during his tenure which will end on 30 November, 2015. " I am happy with the opportunity given to me to serve the University and I will always make myself relevant to do more. The process of transition was done in a civil manner. This is a message for the nation", Prof. Adewole said.

"My tenure is the first in history where the four unions supported the vice chancellor and I hope this will continue with my successor", he stated.

In his inaugural address, Prof. Olayinka said the University is a national asset, stressing that it belongs to all Nigerians.

The new VC stressed that he will make UI to be locally relevant, nationally preeminent and globally competitive.

In his emergence as VC, Prof. Olayinka acknowledged the contribution of the governing council, adding that he realized the enormity of the task he was inheriting.