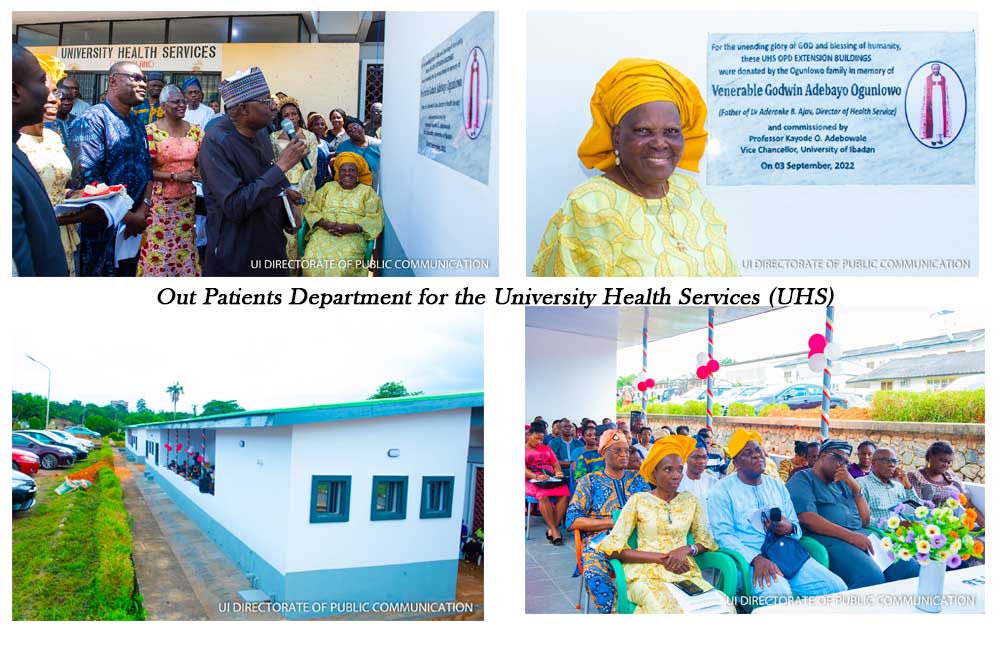 The University of Ibadan has received the donation of a new multi million naira Out Patients Department for the University Health Services (UHS).. The donation , which was financed by a first class graduate of the University, Engineer (Dr) Olufemi Ogunlowo was handed over to the University on behalf of the Ogunlowo family in honour of their late patriarch, Venerable Godwin Adebayo Ogunlowo. Venerable Ogunlowo passed on to glory a little over a year ago. Interestingly, the formal commissioning and handing over of the project also marked the 58th wedding anniversary of the deceased whose wife Lady Evangelist Patience Diekola Ogunlowo was present to witness the occasion. Speaking at the occasion of the dedication and official opening of the building, Engineer Ogunlowo appreciated the University for the opportunity to immortalise their patriarch through the donation of the building. Worthy of note is that the new OPD building which is worth about forty million naira was completed within a period of three months. Earlier in her welcome address, the Director of the University Health Services, Dr Aderonke Ajav, who is also a daughter of the late patriarch stated that the idea for the OPD Extension Hall was conceived during the COVID -19 era, when resources available became grossly inadequate to address the teeming health issues presented at the UHS. She appreciated the donation made by her family and called for further donations from other well meaning individuals and corporate organisations to meet other needs of the UHS, including ambulance, equipments for medical tests, staff training, upgrade of units conversion of records to the electronic mode among others. In his address, the Vice Chancellor, Prof K.O. Adebowale, FAS, mni, bemoaned the deplorable state of tertiary education, particularly in federal institutions in Nigeria. This, he stated is as a result of poor funding and lack of sustainable funding model for such institutions, unlike what operates in other climes. He appreciated the Ogunlowo family for the multi million naira worth of building donated to the Institution, stating that such gestures would help bridge the funding gap being experienced by the University and save it from collapse. He therefore called on the alumni of the University to emulate this gesture and support their Alma mater for sustainable development. Prof Adebowale was full of gratitude to the Matriarch of the Ogunlowo family, Lady Evangelist Patience, Diekola Ogunlowo who is also an alumna of the institution for the encouragement and support provided for her children in ensuring the donation to the Institution. Present at the occasion were stakeholders from the institution, including some members of the management team.