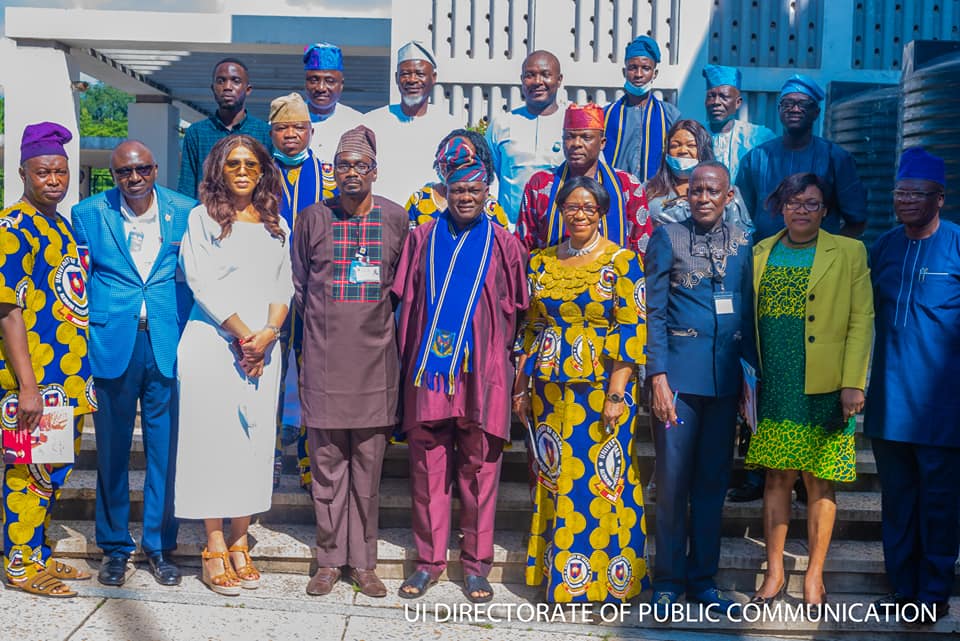 The Acting Vice Chancellor (AVC) of the University of Ibadan, Prof. A. B. Ekanola has made a clarion call on the University alumni to see themselves stakeholders in the success of the University, and create avenue for continual interaction with their alma mater in a bid to contribute to its success. In his words: “…Globally for Universities that are rated as reputable, much of their success is credited to their alumni…we would desire that by the time the Alumni body of the University would have their Hall of Fame, your names would also be written in gold.” The AVC made this call while receiving a worthy alumnus, Senator Teslim Kolawole Folarin, the Senator representing the Oyo central senatorial district in the Nigerian upper chambers in his office recently. Prof. Ekanola, while receiving the distinguished senator, expressed a sense of pride and delight at the outstanding calibre of products which the university has, of which Senator Folarin was one. According to him: “One way of measuring the success of an Institution is to look at its product and consider how well they are doing in various walks of life, and with products like you (Senator Folarin), the University is doing very well. The erudite scholar appreciated Senator Folarin profoundly for facilitating an ICT Centre for the University through the Nigerian Content Development and Monitoring Board (NCDMB), stating that the facility was already being put to good use, while also encouraging much more, stating that it would be the beginning of a longstanding relationship between the Senator and his alma mater. He appreciated University of Ibadan Alumni Association (UIAA) and the Oyo State branch of the Association particularly, for facilitating the Homecoming of the distinguished alumnus. He also appreciated the array of distinguished personalities, both from his political party, and the Ibadan dynasty. Senator Teslim Folarin was in the University as the Guest Lecturer/Awardee at the 2021 Alumni Lecture/Distinguished Alumnus Award of the UIAA, Oyo state branch, and also to commission the ICT Centre he facilitated through the NCDMB. He appreciated the management of University of Ibadan and the Alumni Association for the recognition given him as an alumnus, and the honour bestowed on him as the recipient of the Distinguished Alumnus award/Guest lecturer at the 2021 Alumni lecture of the Oyo branch of the UIAA. Present at the occasion were stakeholders from the University of Ibadan, including the Deputy Vice Chancellor (Administration), Prof Kayode Adebowale, Registrar, Mrs. Olubunmi O. Faluyi, the Director, University Advancement Centre, Mr. A.A. Adeosun, the Director, Directorate of Public communication, Mr. O.M. Oladejo, as well as the Deputy Registrar, (Vice Chancellor’s office) Mr. Oluwole Dada among others. Also present on the visit were the President, UIAA Worldwide, Prof Elsie Adewoye, the Chairman, UIAA Oyo branch, Mr Bello Adetokunbo, the National Treasurer, UIAA, Dr. Flora Olaifa among other members of the Association. In the company of Senator Teslim Folarin were his wife, Barrister Angela Folarin, an array of distinguished personalities, including past and currently serving members of his political party, as well as chieftains from the Ibadan dynasty. One of the highlights of the visit was the commissioning of the ICT Centre, which Senator Folarin identified as one of the seven which he facilitated in higher institutions across his Geo political zone, ensuring that his alma mater benefitted from the gesture. Following the commissioning of the ICT Centre was the 2021 Alumni lecture, where Senator Teslim Folarin delivered a lecture entitled: “The Challenges of Governance and Security in Nigeria”, in which he admitted that the Nigerian state is plagued with a myriad of governance and security challenges, which have been built up over decades of democratic and military rule. While not exonerating government, the Guest Speaker Blamed some of these security challenges on the restlessness of the youths who are not gainfully engaged due to high unemployment rate in the country, and advocated for a redesign of academic curriculum by tertiary institutions to prepare youths for self-employment in order to stem this trend. Senator Teslim advocated for a more flourishing town/gown relationship, stating that while government takes responsibility for, and addresses its shortcomings, the academic should also partner with government by promoting translational research and tailoring their curriculum to encourage self-dependence and self-employment among the youths. The lecture was well attended by members of the Political class, university alumni, the academic community and other distinguished personalities from different walks of life.