I REMAIN COMMITTED TOWARDS ENSURING A CONDUSIVE LEARNING ENVIRONMENT FOR STUDENTS - UI VC. 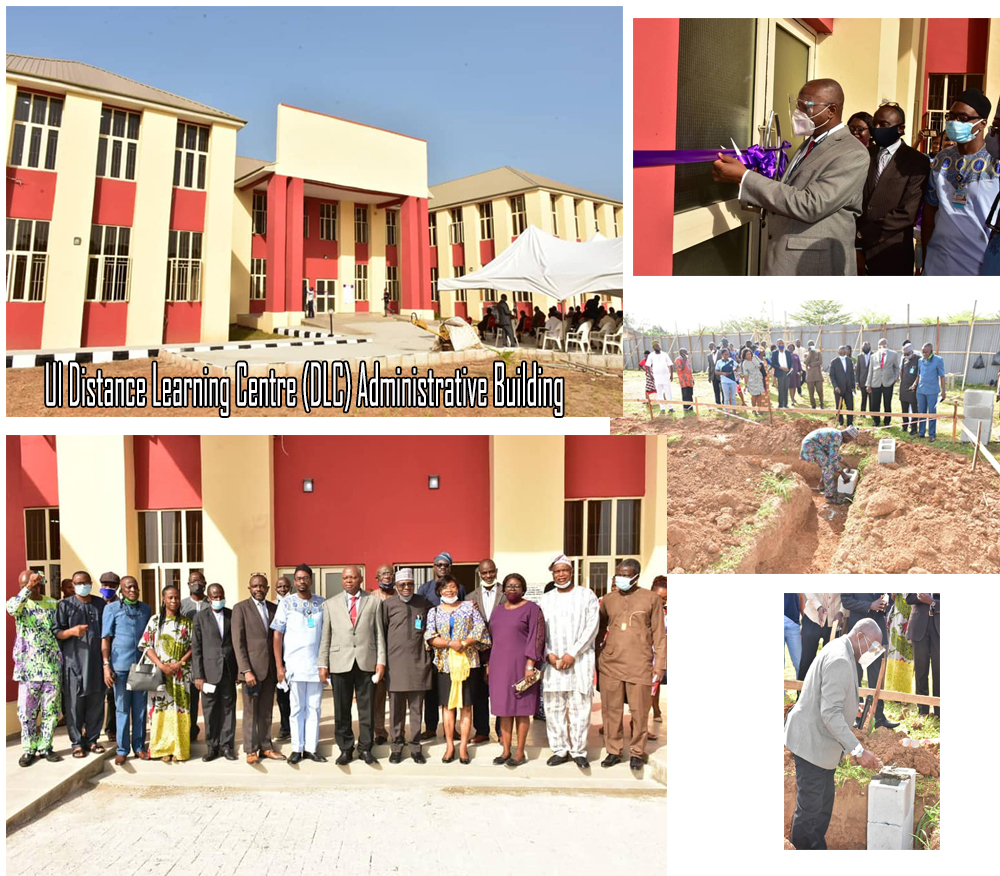 The Vice Chancellor of the University of Ibadan, Prof. Abel Idowu Olayinka, FAS, has reaffirmed his commitment towards ensuring a condusive learning environment on campus, in order to sustain the University's impressive ranking among other lead institutions in Africa and the world. This statement was made on the occasion the Commissioning of the UI Distance Learning Centre (DLC) Administrative Building, and Turning of the Sod of the Centre's Multi-purpose Lecture Theatre at Ajibode recently. Prof Olayinka expressed great delight at the commissioning and turning of the Sod of the UI DLC project, stating that it was another demonstration of his Administration's efforts at enhancing infrastructural development, not only in UIDLC, but all over the University campus, as witnessed in recent times. With nostalgia, the VC recalled the journey through which the UI DLC had travelled, through succesive Administrations, stating that the Centre had come a long way from when it started with rented and temporary buildings to the edifice it is emerging to be today. He applauded the outstanding role of the UI DLC 1500 seater CBT Centre, which remains the largest in West Africa as at today. Prof Olayinka acknowledged the past and current Administrations of the UIDLC for their input in ensuring that the Centre is an enduring legacy which would stand the test of time. He pledged the continuous support of the University management in ensuring a condusive learning environment for students , not only in the DLC, but also in the entire University. The Director, UI DLC, Prof. Emmanuel Babatunde Omobowale, in his address, described the event as an epoch making one. He appreciated the University management for their unflinching support to the Center, which made it possible to achieve the laudable feat of completing the UI DLC Administrative Building within a record time of one year after the Turning of Sod ceremony (Sept. 2019 - Nov. 2020). He stated that situating the Administrative Building at the 1500 seater CBT Centre at Ajibode was conceived in order to centralise the Administrative process and activities of the centre to minimise the overhead cost of maintaining two office complexes in Ibadan. Prof. Omobowale acknowledged the efforts of his predecessors, especially the immediate past Director, Prof. Oyesoji Aremu, who, according to him, doggedly pursued and initiated the construction of the Administrative building at the CBT Centre, as well as Prof Bayo Okunade who "courageously initiated the move to build the 1500 seater CBT Centre which has opened up the expanse of land for the further development witnessed today". Looking at the future, Prof. Omobowale says his Administration envisions a UIDLC where her learners would be given the comfort of studying and engaging in interactive sessions conveniently within same premises, part of which efforts is being demonstrated by the turning of the Sod of the UIDLC Multi-purpose Lecture Theatre. The Administrative Building was commissioned by the Vice Chancellor, who also proceeded to conduct the Turning of the Sod ceremony of the Centre's Multi-purpose Lecture theatre after a guided tour of the Administrative building. In the VC's company were other Principal officers, including the DVC (Administration), Prof. Kayode Adebowale, the DVC (Academic), Prof. Adebola Ekanola and the Registrar, Mrs Olubunmi Faluyi. According to the Director of the Centre, the projects are a testimony of the UI and DLC management's unwavering commitment to take the centre to a glorious height. Also present at the ceremonies were other stakeholders in the University community.