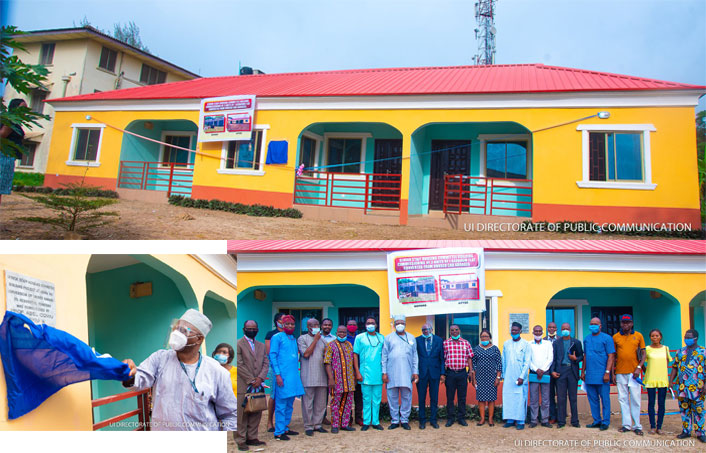 One of the challenges constantly faced by the management of the University of Ibadan (UI), just like many other universities, is the need for continuous physical expansion to accommodate a corresponding expansion in its programmes, services, scope and population. To meet up with the demand for such expansion, the University Management continues to make efforts towards ensuring adequate accommodation, both as living quarters and as office complexes and lecture rooms, etc, in order to enhance teaching and learning on campus. One of such efforts is what resulted in the commissioning of 6units of 1 bedroom flats on the Amina way of the campus. The Vice Chancellor(VC), Prof A.I. Olayinka, FAS, while speaking at the occasion, stated that the challenge of inadequate accomodation on campus was such that it began to require thinking, not just outside the box, but without any box at all, as the 6 units of 1 bedroom flats were developed from abandoned garages on Amina way. He acknowledged the effort of the Prof. M.O. led Senior Staff Housing Committee (SSHC) and appreciated them for being innovative in their approach towards solving the accomodation problem on campus, and also delivering the flats in record time. Prof Onilude, earlier in his remark, highlighted the challenges and the efforts of the SSHC to mitigate them, resulting in completion of the Housing units, which according to him was the fourth in the series of intervention. He appreciated the support of the University Management in their drive towards providing adequate accommodation on campus. Present at the commissioning were the Deputy Vice Chancellor (DVC) (Administration), Prof Kayode Adebowale, DVC (Academic), Prof. Adebola Ekanola, Bursar, Dr M.A. Alatise, University Librarian, Dr Helen Komolafe Opadeji, Member, UI Governing Council, Mr C.T.A. Semowo, Director, Physical Planning, Mr Olaniyan, Director, Directorate of Public Communication, Mr O.M. Oladejo, Deputy Registrar, ( VC's Office) Mr Oluwole Dada, members of the SSHC among others. In the same vein, the VC also commissioned the new Institute of Education Building complex at the Ajibode extension of the University recently. The Institute of Education, which has suffered inadequate accomodation for year, having been "tenants" at the Faculty of Education for years finally received a boost, as it is finally now able to move to its own building complex which provides adequate accommodation for the Institute. The Director, Institute of Education, Prof J.G. Adewale stated that the provision of the be Building complex, funded by the Needs Assessment Project 2013 of the Federal Government of Nigeria (FGN) was a dream come true, as it would further enhance their output. He appreciated the support received from the management and a host of others, who all contributed towards the realisation of the dream. The VC, in his address, challenged the Institute to further make something great out of the edifice by putting the name of the Institute in the forefront, both locally and internationally by its achievements. He congratulated staff and students of the Institute while also appreciating the Elders and other staff of the Institute for their patience and efforts towards the realisation of the dream to move to a more conducive environment, which has finally come true. Others who spoke at the event included as one of the Elder statesmen and past Directors of the Institute like Prof P.A.I. Obanya, Prof. M. A. Araromi, Prof S.D. Ayodele and Prof. Adenike, E. Emeke, who all recounted efforts made in the past towards achieving the dream of the Building complex and expressed their pleasure at witnessing such an epic event. The event was rounded off with the commissioning of the building by the VC, followed by a tour of the facility. Also at the occasion were the DVC (Administration), Prof. Kayode Adebowale, DVC (Academic) Prof Adebola Ekanola, Bursar, Dr. M.A. Alatise, University Librarian, Dr. Helen Komolafe Opadeji, Elder statesmen, past Directors, staff and students of the Institute among others.

THE FRENCH EMBASSY PARTNERS WITH UI TO PROMOTE RESEARCH AND INNOVATION.